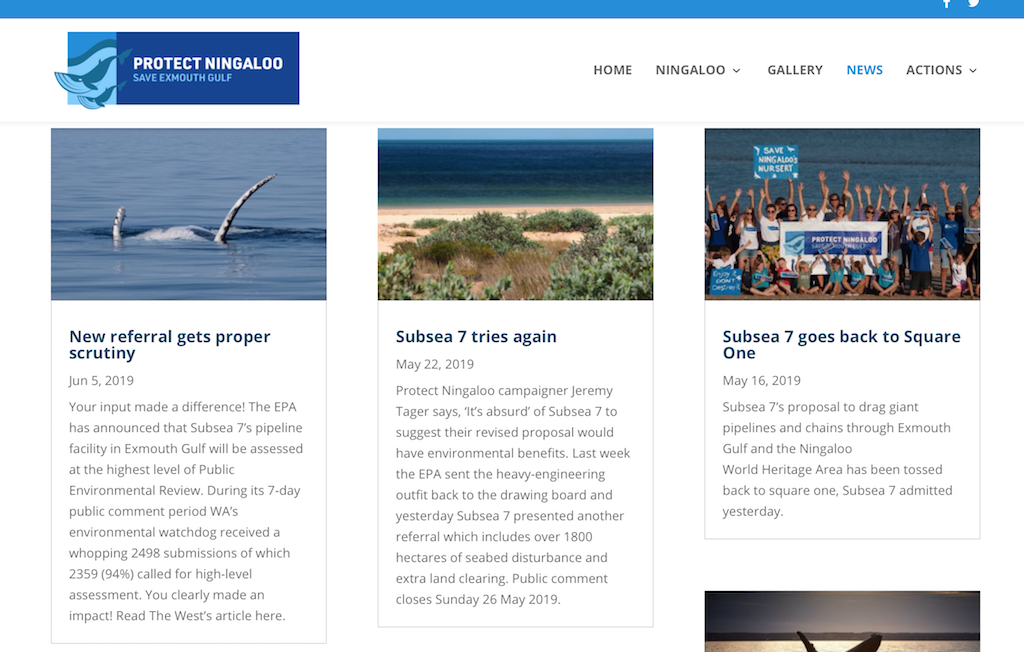 The Protect Ningaloo web site reports that the ‘historic Save Ningaloo Reef campaign that ran from 2000-2005 was supported by organisations such as the Conservation Council of WA – the state’s premier environmental NGO and the Australian Marine Conservation Society – the nation’s peak marine charity, researchers, tourism operators, rec-fishers, birders and enthusiastic amateur nature lovers from all over the world‘.

It seemed that marine sanctuaries and conservation attempts were being heard and acted upon. However, many great steps forward have been trampled on and discarded in the last decade. Ningaloo Reef is being threatened by a proposal for a gas pipeline and onshore fabrication facility. Similar to proposals seeking environmental approval in areas like the Great Australian Bight revisions have been made giving very short times for public comment. Environmental law and approval processes seem to give a bit of reprieve but they need super-strengthening.

You can follow the advocacy for this unique ocean habitat, the Exmouth Shire’s strange departure from previously held positions and the submissions by Subsea 7 here.

In one example posted in March 2019 titled ‘Subsea 7 taps EPA for Exmouth Gulf Concessions’ the organisation announces:”Subsea 7 now says there’ll be far more seabed disturbance and even more land clearing than previously admitted. Seabed disturbance from towing massive pipes through Ningaloo’s Nursery has now been revised upwards by 1464 hectares and onshore construction will destroy another 7 hectares of vegetation.” The article they link to was published in the West Australian.

The article opens with: “Concerns have been raised over Subsea 7’s last-minute request to the Environmental Protection Authority to change components of its Exmouth pipeline proposal.

Subsea 7 has submitted changes to the onshore pipeline fabrication facility, about 35km south of Exmouth, which would cause an additional 7ha of vegetation clearance, on top of the 170ha already proposed.

More importantly, it has admitted the launch and towing of the pipeline bundles through the Exmouth Gulf will cause up to 1464ha of seabed disturbance, when originally Subsea 7 claimed there would be none.”

When scientists claim, based on  solid data, that we need to stop extracting coal, oil and gas, that the oceans are dying and need to be protected how can these proposals even be considered? It is really beyond belief. 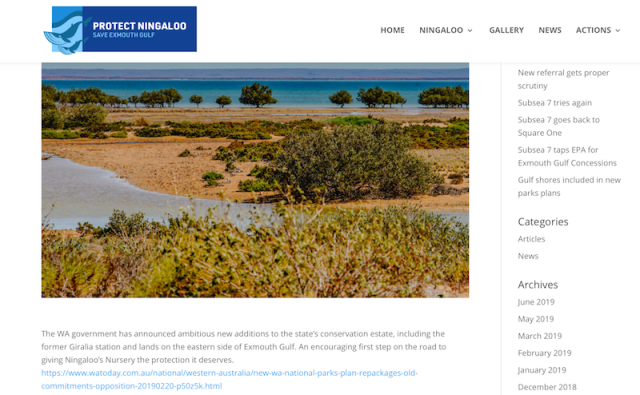 Enticing news of increased conservation reserves is frequently followed by a submission for something far more destructive than the offered reserve offers in benefits. I refer also to Gina Rhinehart’s offer to swap part of her leased Station Property for massive water extraction rights in the Fitzroy Valley.

← Protection for Oceans
Action for the Amazon Fires →